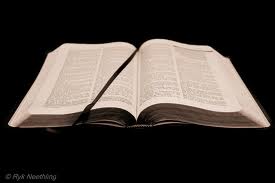 We hear the phrase, “the Word of God!” quite often. And, we quote Paul who told Timothy that, “All Scripture is inspired by God . . .” But, what is that Word of God or Scripture? The fourth-century Vulgate? The 1560 Geneva Bible? The 1611 King James Bible? ‘Our Daily Bread’ devotional? None of them, actually.

The Scripture Paul referred to is the Torah, or Old Testament, available in Hebrew and in Greek in the first century. It was what the Bereans used to hold Paul accountable for his teachings of the prophetic fulfillment of the coming Christ by Jesus.

The word (lower-case ‘w’) represents the words spoken by God as when He spoke the world into existence or when He spoke of the coming Christ and our reconciliation with God through Him. In fact, the Word (upper-case ‘W’) is the manifestation of the reconciliation word(s) of God (i.e. Revelation 19:13).

So, what is the Bible and where does it come into play if not necessarily the Word of God? It’s a collection of ancient texts consolidated by groups of men after much arguing and debate; it contains the Torah and many first and second-century documents.

The Old Testament Torah is a collection of oral traditions, historical documentation, personal reflections of wisdom and love and lamentations, and prophecies – both current to the times and futuristic in nature. These were inspired by God and written by men.

The New Testament is a similar collection of historical and eyewitness accounts, letters full of wisdom from apostles, and prophetic and apocalyptic literature. The Gospel accounts of Jesus’ life, death, resurrection, and ascension were reiterations of what was spoken of or influenced by Jesus as was the Revelation given to John later. This collection was also recorded by men.

We’re creatures of free will and of differing intelligence levels and backgrounds. So, it’s truly amazing that God entrusted us to record anything related to Him or our Christ. But, despite that and the transliterations, translations, and interpretations that have introduced minor discrepancies in today’s Bible, the core words of God that promise hope of the future through the Word – our Christ – stands untarnished and remains intact.

The savior of mankind, Jesus, foretold of two last-days witnesses who will proclaim the everlasting Gospel of reconciliation between God and man one last time before God’s incredible wrath against creation is poured out.

Then I said to him, “What are these two olive trees on the right of the lampstand and on its left?” And I answered the second time and said to him, “What are the two olive branches which are beside the two golden pipes, which empty the golden oil from themselves?” So he answered me, saying, “Do you not know what these are?” And I said, “No, my lord.” Then he said, “These are the two anointed ones who are standing by the Lord of the whole earth.” —Zechariah 4:11-14.

These are the two olive trees and the two lampstands that stand before the Lord of the earth. —Revelation 11:4.

What we do know is that the two witnesses will prophesy for three and a half years during the entire Great Tribulation sponsored by the Antichrist. They will have the supernatural ability to control the rain, turn water to blood, and smite the earth with plagues (this sounds a lot like what happened in Egypt during the exodus).

BEHOLD, HE IS COMING WITH THE CLOUDS, and every eye will see Him, even those who pierced Him; and all the tribes of the earth will mourn over Him. So it is to be. Amen

There’s the Church, which is the entire assembly of Jesus’ followers, and there are churches (lower case), which can represent local collections of Christian believers or followers (there is a difference!).

The Church as a whole is responsible for being obedient to our covenant with the Christ. We are to do these things in particular:

In summary, the Church at large is composed of true followers of Jesus who are obedient out of their faith by honoring God and treating their fellow humankind appropriately. This includes caring for them.  Additionally, Jesus commanded us to spread the good news of salvation and make disciples. Everything we do as the corporate Church should work together for these purposes.

The final countdown to the grand finale of our world as we know it has begun and the clock’s ticking is getting louder as we see signs of the times and anticipate the conclusion of God’s creation in its current form.

A glimpse of what’s to come:

Looking for guidance? Many man-made theories propped up by a few, specific Biblical verses (often taken out of context) abound.  So, find out for yourself!  Here’s how to begin: