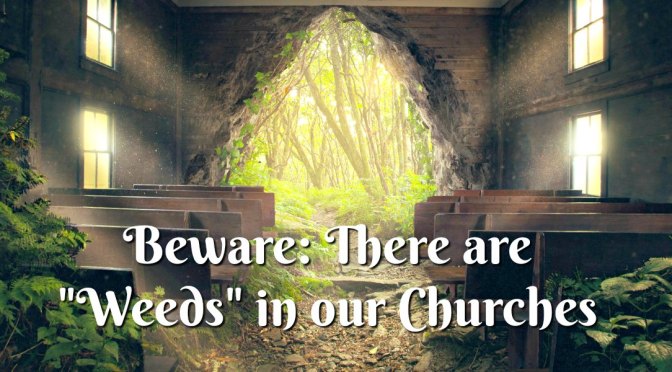 Last time, I re-introduced the concept of weeds (fakes and evildoers) in the Church (Jesus introduced it first!) and explained that we need to recognize a weed to keep from becoming one and putting ourselves into God’s coming wrath. But what are we supposed to do about churchy weeds—those people claiming to be Christian who bring wickedness into our midst and poison us? Let’s see what Jesus and Paul had to say on the subject.

As is often the case today, the Corinthian church tolerated sexual immorality. Paul’s response? Remove the immoral person for their and the community’s sake (1 Corinthians 5:1-13). “It is actually reported that there is sexual immorality among you . . .  God judges those outside. ‘Purge the evil person from among you.’”

And the Thessalonian church permitted slackers (2 Thessalonians 38-15). Paul reprimanded them and instructed the church to expel the lazy people: “. . . Now such persons we command and encourage in the Lord Jesus Christ to do their work quietly and to earn their own living. . . . If anyone does not obey what we say in this letter, take note of that person, and have nothing to do with him, that he may be ashamed. . . .” Reconciliation is key here!

Jesus explained in Matthew 18:15-17 that anyone rebelling against God’s righteousness (sinning) who will not accept correction must be sent out of the Christian community: “And if he refuses to listen even to the church, let him be to you as a Gentile and a tax collector.”

“Ron! Why were (and are) correction and possible expulsion necessary?” We can’t maintain God’s standards without gentle guidance and correction within the Body of Christ. The spiritually mature must model and execute godly behavior, so others will know how to behave. Why must we identify churchy weeds—people who refuse to adhere to God’s standards? To protect everyone else and present a clear image of Him to the world. Don’t we remove rotten food to protect the good?

Unfortunately, discipline (for correction and reconciliation) is nearly impossible today. Why? First, there are too many weeds and not enough modeling. Second, the church is an open and unmanaged community regularly infiltrated by immoral people who corrupt the Body.

So, how do we remove weediness from within the Body of Christ? Teach godly principles—God’s righteousness, and model godly behavior (to show how to put it into practice: it rubs off!) Privately call out ungodly behavior and guide the rebellious and immoral to better behavior. What if that doesn’t work? Show them the door to protect God’s children.

In summary, we were never to permit or tolerate weeds in the church. It isn’t good for Christianity and presents a tainted image of our Creator. In the last of our Weeds episodes, we’ll explore how weeds make more weeds until they take over the Church!